Doming, as I call it, is not for the faint-hearted but if you want to give it a try, join me for a whistle-stop tour of the process.

My domes are still imperfect but as the old mantra says, practice makes perfect. And it’s true, I am getting gradually better at doming and now have two complete domes (one more and I will have enough for my sculpture). But having said that, it’s a tricky process.

1) To begin with I laid my metal circle flat on the smallest depression of my wooden doming block. I have drawn concentric circles on it to guide me when hitting it with the hammer

I used a 40lb dome pien hammer (from screwfix) to make a circle of impressions in the center of the circle I then began to work out into the second circle. This process gradually stretches the metal. You need to remember that the metal has to stretch furthest at the centre and because of this, at the end of each row you must return to the centre and work back out again otherwise it won’t work properly. 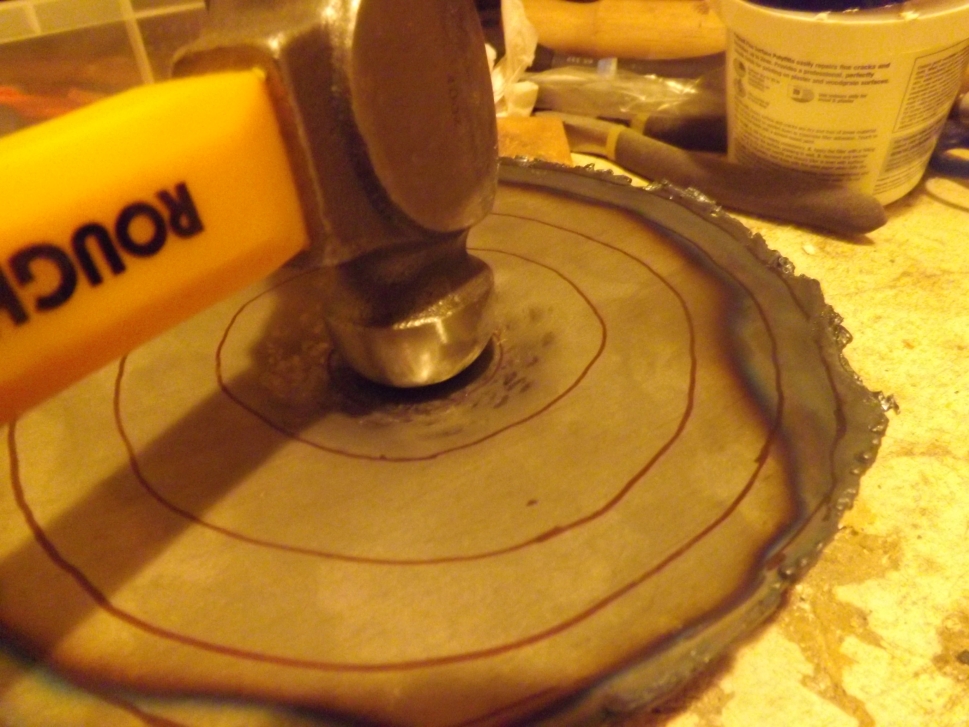 nb. The hole in this piece is from using a home-made circle cutter but with hindsight, to get a good circle shape I might try to cut a circle without it next time to avoid this.

2) As you can see, the dome has now filled the first depression in the block so I have moved it up to the next one. 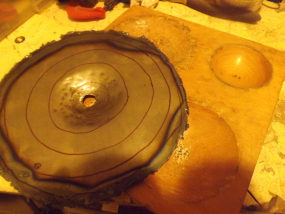 I continued to do this until I had reached the largest depression and then I then flipped it over and decided the dome wasn’t as high as I wanted it to be so I went back to the third smallest depression and started working outwards from the centre again.

I then moved it back to the second smallest depression and hammered it until it was as deep as I could get it.

3) I then worked around the next circle of the dome because it was now larger than the largest circle, I also had to slightly angle it as I progressed. Remember you must to return to the centre and work outwards again. 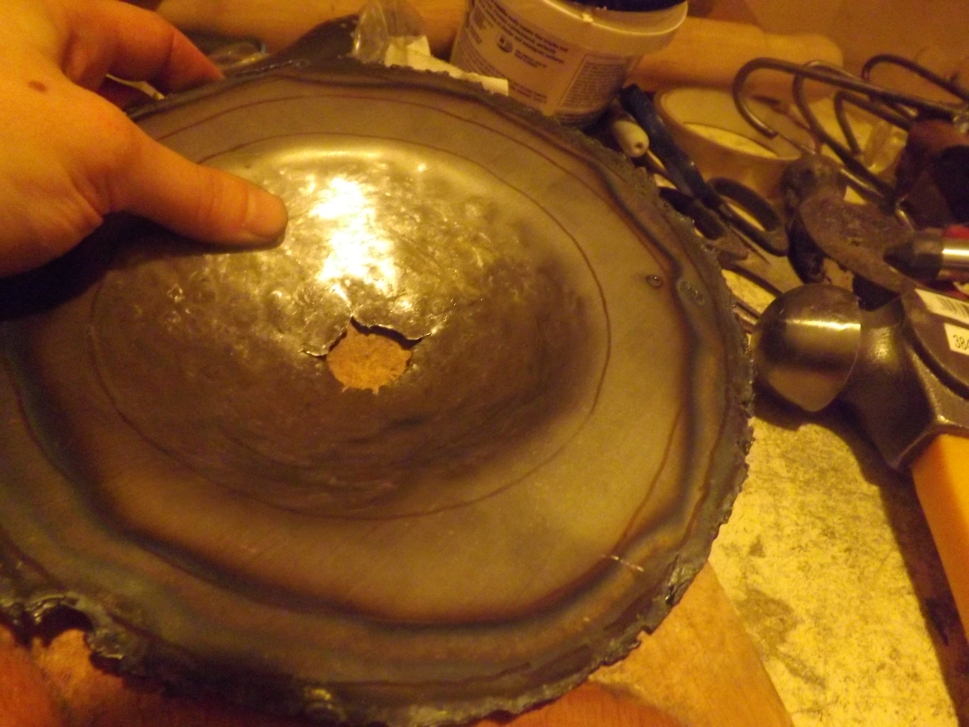 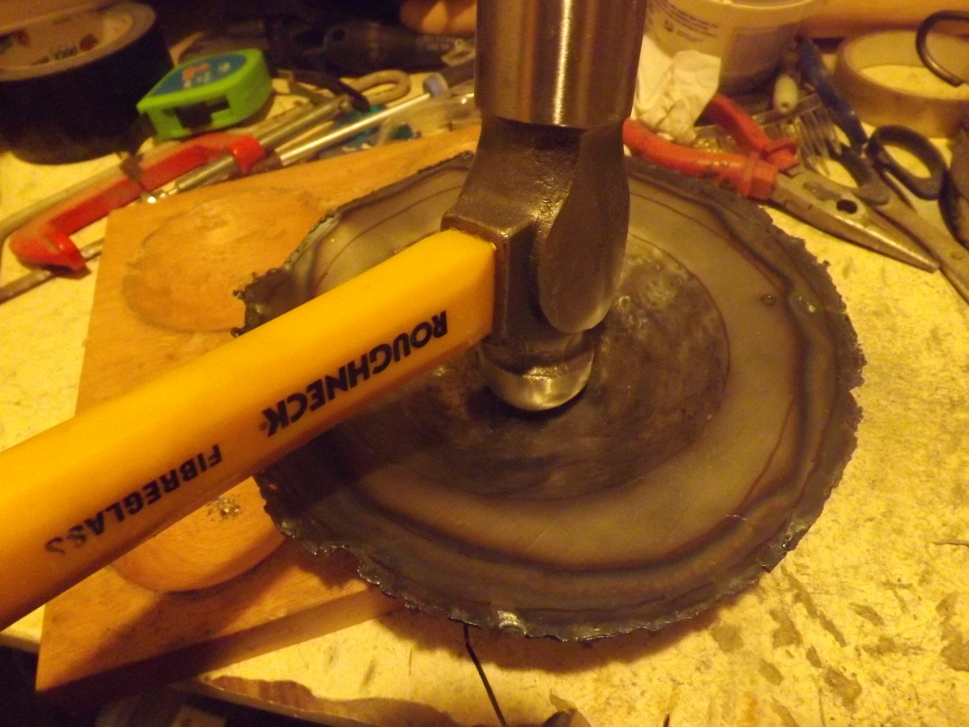 4) I am now on the final row and the edges are crinkly so it is now necessary to beat the crinkles out.

This bit was tricky to photograph as I needed both hands one to hold the steel and one to hammer! Basically I turned the dome on its side, placed it inside the largest depression and hammered each crease out. 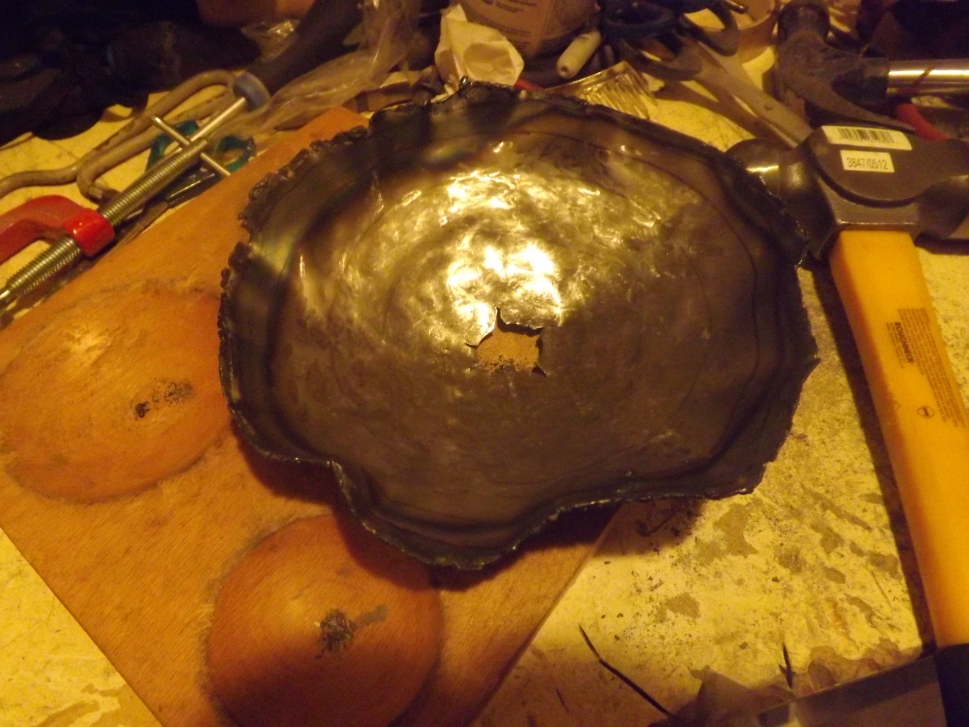 The new dome is shown next to the original dome – and as you can see some improvement!

A version of this feature first appeared on http://www.emilywatkinsartist.wordpress.com and is reproduced here with kind permission